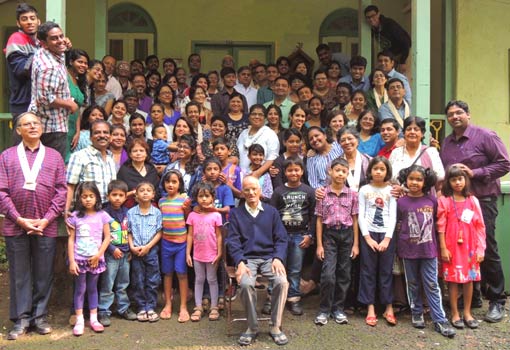 – by Luke Lobo, senior coordinator of the community

Our community came into being in March 2000. Many of its members originally belonged to a charismatic prayer group, St. Patrick’s Prayer Fellowship, which had started in 1988. From October 1999, for a period of about three months, the members of the prayer group felt the need to pray and wait on the Lord to discern the future course of the group. On the basis of prophecies received during these weeks of prayer, the leaders of the group felt that the Lord was moving them to some form of community life. These messages were also confirmed by others outside the prayer group who were in some way associated with the group.

In November 1999, a few members of the Community of Jesus, Light of the World, Mumbai, were invited to share their experience of community life at the prayer group’s annual family camp. In March 2000, members of the community in Mumbai were asked to give further input on community life to those members of the prayer group who felt called to form community. Following that weekend, about 30 people felt this call, and Krist Kiran Parivar was born.  The community in Mumbai continued to support us by regular visits from their senior coordinator and others, leading us in our first faltering steps in community life.  Henry Fernandes, then president of the Asian Region of the Sword of the Spirit, also visited and gave us input.

We are now nearing the end of our formation program as a Sword of the Spirit community and look forward to standing shoulder to shoulder with other fully-formed communities. We are thankful for the support we have received in our effort to build community, and the relationships we share internationally have been a blessing.

The name “Krist Kiran Parivar” means the Family of the Rays of Christ. The name was chosen after all the members gave their prayerful suggestions. The members felt that the community was being called to be the rays of Christ in the world and especially in the city of Pune, while Christ himself remains the centre and source of our light.

The logo was designed keeping this in mind, incorporating the cross, the rays and the lotus, India’s national flower. The inner ring of its petals stand up together, signifying our solidarity and close relationships, and the outer ring spreads outwards, signifying our mission to bring Christ to others.

Members of the community come from different parishes of the city. Living closely together in neighbourhoods is challenging in India, since investment in a house is for most people a one-time affair, and one cannot afford to buy and sell houses at will. Most of our members come from middle class backgrounds.

Pune is a university and manufacturing city of almost six million people. As in most cities, we have a mixed population of people who have migrated from different parts of the country. Members of the community are from different cultural and linguistic backgrounds. Members come also from varied educational and professional backgrounds – we have many teachers, some IT professionals, businessmen, retired army officers, a tailor, domestic helpers, homemakers, and so on. The community has about 100 embers in all, including the single professionals, young adults and children. Our oldest member is 82 years old and our youngest is 1 year old. Most of us are Catholics. Christians in India are a very small minority – less than 3% of the total population and less than 1% of the population of the city.

Our community meets frequently and in various groupings so that we can strengthen one another in Christ. We consider meeting together a high priority. The whole community meets every 2nd and 4th Sunday for praise, worship and teaching and in small men’s groups and women’s groups for personal sharing twice a month. Our Young Adults (ages 13-21) meet every Sunday and hold their own outreaches. Our young professionals outreach group, the Joshua Gen, meet twice in the month for prayer, teaching and fellowship.

Besides these we have an annual residential weekend for the whole community for “fun, faith and fellowship.” We also have leadership training programs, and men’s and women’s events. The members of the community who have made a long-term covenant commitment also meet a few times a year.

We have declared the year 2016 as a year of mission for our community. We feel the Lord wants us to expand our territory – to bring many people into closer personal contact with him and closer contact with community lived for him.

If people would like to contact us, they can email us at kristkiranparivar@gmail.com. Soon we’ll have a website up and running to make it easier for people to get in touch and see who we are.